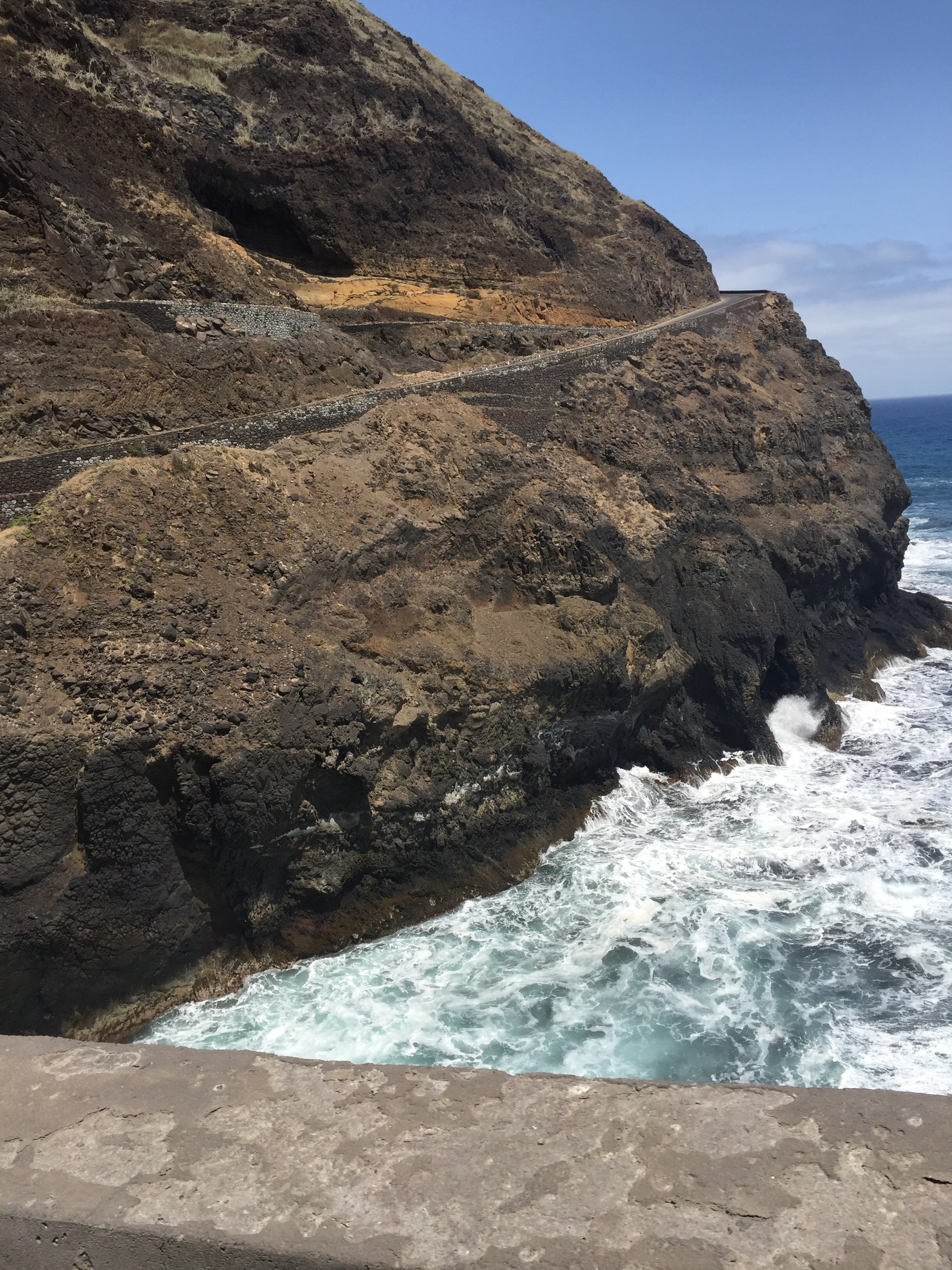 Four months ago, I embarked on a journey I did not understand. I was called to visit an island in the middle of the Atlantic ocean for reasons I cannot comprehend. I felt connected to a place and to people I had not yet met.

I took a risk.

I remember after having a book signing event for Meditative Questions in Redondo Beach, many of my closest friends came to my apartment to hang. This was last November. Before we went to dinner, I told them about my plans to visit Cape Verde (as it is known in America). I was so excited and I did not even know why. (My Gem K later said that Atlantis may be calling me back home. I smiled inwardly and outwardly at this.) Rosa asked me if I might move there. I said maybe. (I had no idea really…only a feeling I couldn’t quite understand.) At the signing, she’d asked me a question….she asked if writing/publishing my book had inspired me to do anything else. I remember answering that bold moves tended to inspire other moves.

I could not have known that a little over a month later, I’d be cutting off all of my hair and taking a trip that would change my life more than I expected. I had no idea I would be inspired to begin again, but I was.

In mid-January, I was hopping on another plane. Exhausted and happy from the honor of being in one of my sister’s weddings in December and the holidays with family, I slept for most of the 11+ hour flight to London and then Lisbon. I’d wisely booked a hotel in Lisbon and spent 24 hours enjoying room service and massages. My body was exhausted. But after flying four more hours (and waiting another hour in line for a Visa at the airport in Praia), I didn’t feel it. For, you see, I was met with a huge smile by a friend I’d never met. Joli Bela — who helped me arrange my entire trip to Cape Verde — became a friend so fast from a distance, I’d forgotten we’d never met. I ran to her in the airport and gave her a big hug…haha! She took me around the island of Santiago and introduced me to the most wonderful people. I liked the island but I will freely admit that I didn’t love it. Joli kept telling me that Santo Antao was my island. I don’t know how she knew me so well.

Three days into my trip, I traveled to Santo Antao. You have to want to get to this island, as it requires a flight to the island of Sao Vicente and then a ferry ride. Through Joli’s tour company (A Vontade Tours), I’d hired a driver to get around the island. As we began driving to my hotel, I was reminded of being in Iceland. It was like being on the moon. There was nothing around for miles, and my driver pointed out the inactive volcano on the island. The fresh ocean air danced on my face and stretched my lips into a smile. I don’t know why, but in those moments I felt so free. I felt connected. When we stopped to get water, I snapped this picture. I think I’d already made a decision. 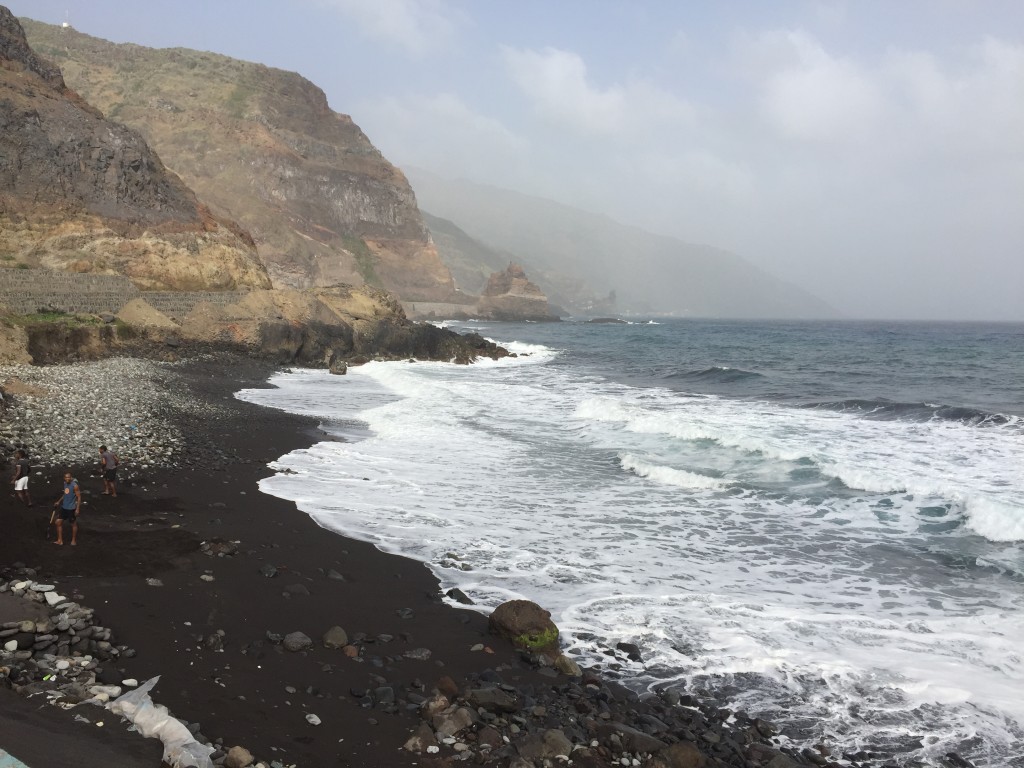 The next few days in Santo Antao were like a dream. I didn’t want to leave. But I did, reluctantly, so that I could spend more time in Praia and visit the island of Sal. At that point, nothing could really compare with Santo Antao, and I started spending time trying to figure out how I was going to get back there. In a Moleskin notebook, exactly the same type of notebook I used to write Meditative Questions, I started planning my move to Cabo Verde. It was the end of January, and I thought I could reasonably pull off everything and move in April.

The move happened quickly. After being back in LA for a day, I started giving notice of my intention to move. But I’d changed my mind. I decided to move on March 1st. It was February 1st. I chose the shortest month of the year to sell everything, pack, and move to another country. No big deal. Haha. I started making lists. The lists took up so many pages. I didn’t know where to start. Skylar’s grandmother…and my longtime friend…Linda had suggested I read Marie Kondo’s book about tidying up. She told me it helped her get rid of a lot of things. I had so many things…and no plan…so I went out and bought it. I read it in a day and felt that I had some sort of plan. 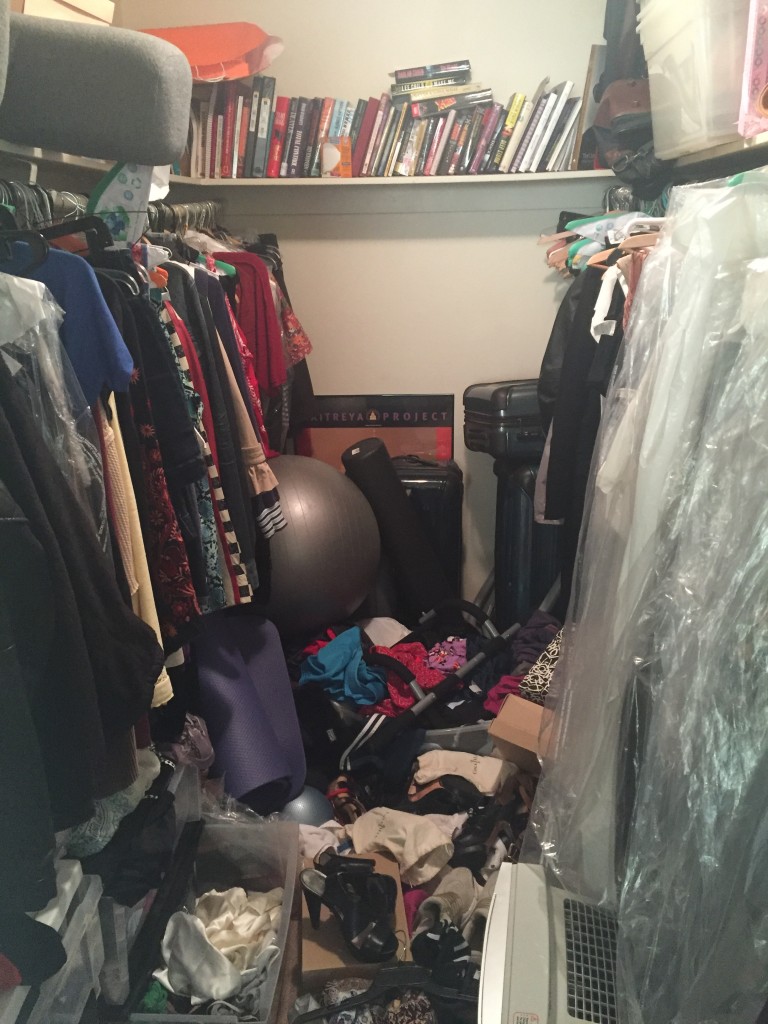 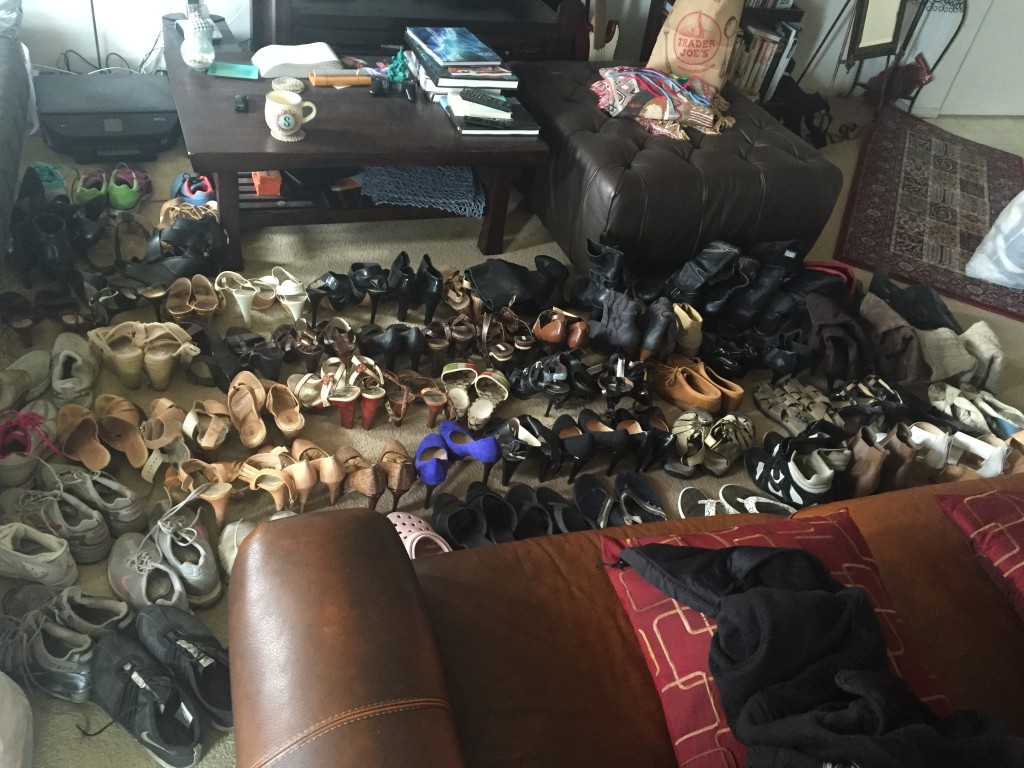 Trying to face all of this at the same time would be enough to drive anyone completely crazy. So I kept myself focused using the KonMari method. Clothes first (shirts, then pants, then dresses, then jackets…), then shoes, then books, then mementos.

On February 4th, I went through all of my clothes. It took me 6 hours and I almost had an emotional breakdown. I was so overwhelmed by the amount of things I had. I think I was embarrassed at myself for acquiring so many things.

I think one of the side effects of living a (stressful) life that is not in alignment with your purpose is that you “treat yourself” as a coping mechanism. Retail therapy becomes a thing because are trying to fill a void. Going to fancy dinners and going on trips become a way to enjoy the life that you have ‘earned.’ But then Monday comes around and you find that you don’t want to get out of bed. You don’t want to go to work, but you have to. You have to pay for the life you want to live. But is that the only way?

While I was going through my things, I found (it wasn’t really lost) the original notebook I used while to write Meditative Questions while  traveling around Asia last year. I’d spent so much time on the pages of questions, that I hadn’t flipped back in the notebook before those pages. Written there were notes to myself. I was questioning myself about the life I was living. Early on in 2015 (and before then), I wanted to quit my job. I fantasized about it. But I didn’t know how I would sustain myself. Would it be like the last time I left Corporate America? Would I just burn through savings for nine months and eventually end up back in an unfulfilling job that paid the bills? I did not want to repeat myself. I had to stop the cycle.

In addition to the beauty of the land and people of Santo Antao, one of the underlying considerations for the move was the significantly lower cost of living. In my opinion, Los Angeles and the rest of the United States has  digressed to a point of being completely unaffordable. I read a study indicating that in every state of the country, a person making minimum wage would have to work over 40 hours a week to meet the average rental expense for housing. Under these conditions, it is virtually impossible to ever ‘get ahead.’

Coupled with the pollution, artificial everything, politics, and incomprehensible police brutality and racial divide in the United States, I absolutely needed a break. And the kind of break I needed was not just a vacation, it was the need for a completely new way of life under new conditions with new love. I had to begin again.

I had to let go of any feelings of embarrassment, regret, and guilt about all of my stuff. I was determined to move with only two carry-ons and a checked bag, while keeping only a few things in storage with my Meditative Questions books. I had to let everything go.

I had new determination every day and began making large donations to churches, shelters, and The Salvation Army. I gave things away to friends and total strangers. And I was fortunate to be able to sell much of my furniture, my car, and my motorcycle. (The process of giving away and selling things was also very emotionally draining.)

There were days when I had so much pain in my back that I could not stand properly. I would try epsom salt baths before getting massages. I’d try to find a way to squeeze in acupuncture and not pay attention to the dwindling clock. I’d purchased airline tickets to Austin and then on to Cabo Verde for early March. There were moments when I would ask myself at 4am why I was doing this. Did I really need to move that quickly? But the Universe would tell me yes so I kept going.

By the end of February, I was having random situations with my vehicles and I was not getting purchase offers on my car that met my expectation. I had so many things left in my apartment still that I didn’t know how I was going to get through it all. I asked Jesus to take the wheel and I realized that not everything in this process of change was going to go my way. Was I going to accept a lower offer on my car or stay for more weeks to get a higher offer? What was most important to me. I had to make a decision.

I decided that I wanted to be free. So I let it all go.

I had to stop worrying that I might not have enough. So I choose to have more faith.

I had to realize that God had always provided. I needed to bask in gratitude for that.

I felt so much love from friends and family that I had to reciprocate that. 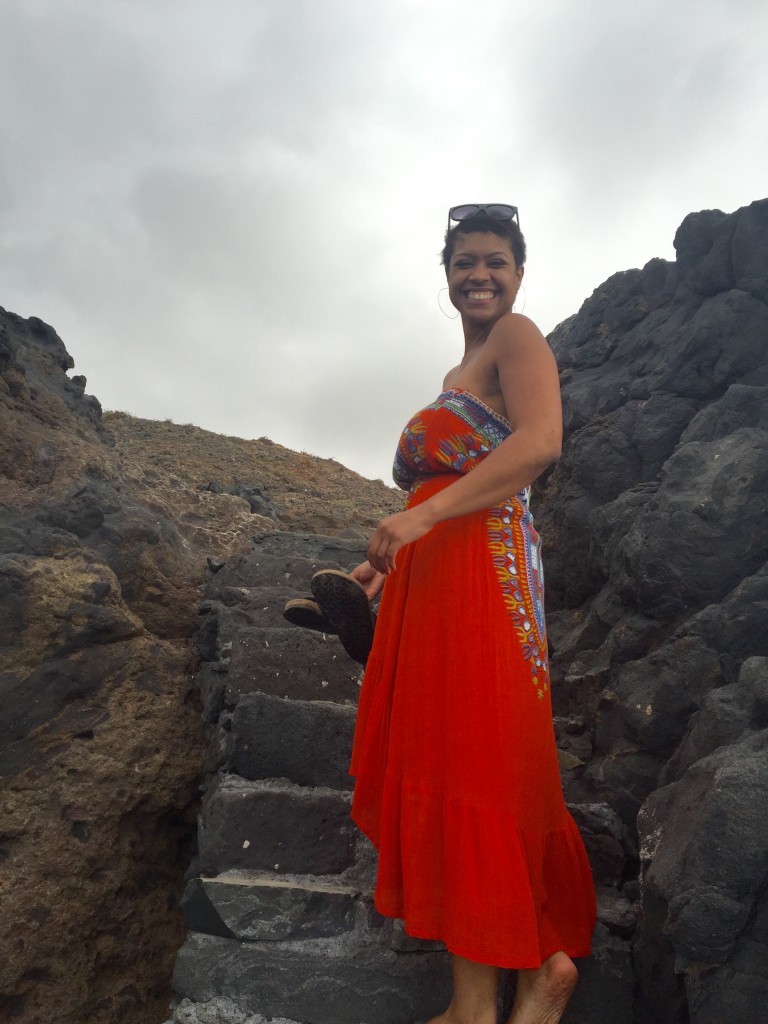 I arrived back in Cabo Verde a little over a month ago. And I’m now living in Santo Antao. So many aspects of the process have been overwhelming. I left behind everything I knew for a series of new unknowns and significant language barriers (I still know only a little Portuguese and Kriolu, but I learn more every day). While I miss family, friends, conveniences (we have it sooooo easy in America!), and my own transportation (still figuring out how to address this here!), I am so thankful for new friends and new family. I have had so much help. All of this includes finding an apartment, coordinating help for me while shopping for household goods on neighboring island (and then getting that help), transporting goods, setting up my stove (which requires an actual tank of gas here), doing laundry, and on and on.

My daily adventures are all at once frustrating, hilarious, exhausting, heart-warming, and life changing. There are moments of worry but then they are followed by perfectly beautiful days without a care in the world. This is life.

It surprises me that I don’t really miss the things I left behind. Things are just things. I am thankful to be here. And I am thankful for the adventures ahead. And I want to invite you on the journey with me.

Every time I write, it is with the hope that someone may pick up a little inspiration. I believe that art is meant to inspire us to discover ourselves and then share.

By freeing ourselves, we inspire others to be free. When we share our gifts, we unconsciously give others permission to do the same.

What can you start doing to get to that place?

What do you need to stop doing?