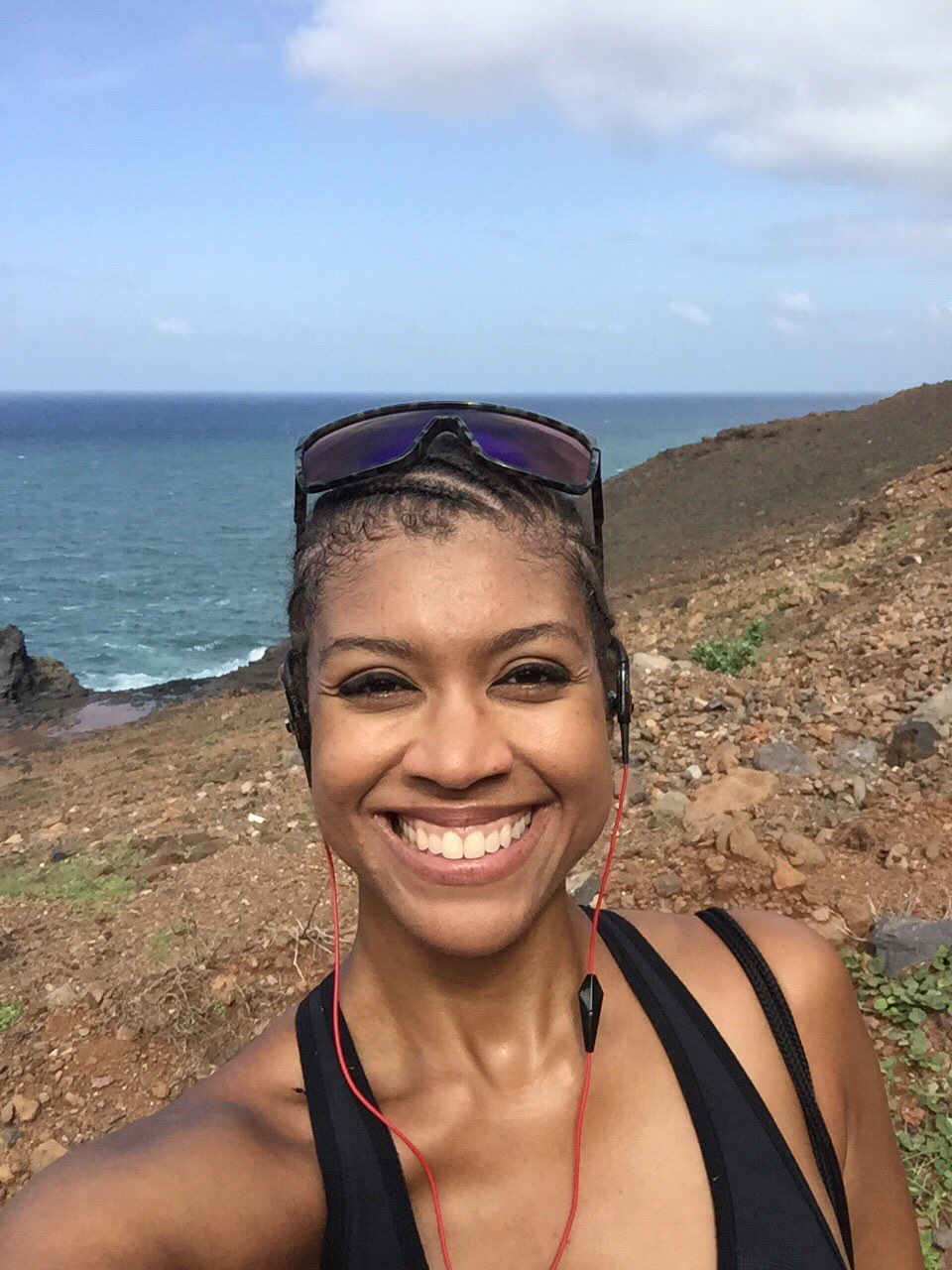 It was September 30, 2016…two days ago…it was the day that the Atlantic ocean swallowed my iPhone6. The featured photo for this post was to be the last selfie sent from my phone. And the bit of ocean that claimed by phone can been seen in the photo…the white wave cresting down below was to be the site of ‘the incident’ haha

September 30th was a beautiful day here in Cape Verde. Clear skies with a little cloud cover insured that it wasn’t too hot. I decided to go on a bike ride. As I unplugged my iPhone from the charger, I noticed that it was still at 45% — the frayed wires on the end of the cord had finally fizzled out — but no matter, that was enough for a few hours of music. I was disappointed that my 10 foot charger cord had bitten the dust, but I had backups. I’d work it out.

I had a great ride around the city and stopped for lunch. The day was so lovely that I didn’t want to stay inside. There was a perfect breeze and cloud cover to shield a lot of the sun. So I braved the massive hill (mountain haha) up to my home and dropped my bike off. I grabbed some water and decided to should go for a hike down to the ocean. As I enjoyed the beautiful day, I happily listened to music and snapped photos during my hike. I was shocked by how much erosion the rains had caused and I was making mental notes that purchasing property too near the ocean here would probably not be a good idea.

One of my favorite areas to hike down to was also different. The smooth black rocks, normally clean, were covered in mud. I hiked all the way down to this area and took many photographs. The water was such a brilliant blue/green! I also took a few selfies that captured both the ocean and the mountains in the background. The way the sun was shining made these photographs spectacular to me. I was in the photography zone! haha

Then all of a sudden, the winds picked up and the waves were crashing beautifully against the rocks. I had to get pictures of this too! I was happily snapping away and then all of a sudden I noticed my headphone cord swaying freely…nothing was attached to it! (I still have no idea how this happened. In the beauty of the moment, perhaps I forgot that I was holding my phone! haha) In a split second, I looked down and saw that my phone was sliding down the rocks — a short stretch of rocks, maybe one foot from the cresting waves. I analyzed the situation quickly and came to the easy conclusion that my safety was more important than the iPhone. I knew that if I lunged for it, I could easily fall into the ocean. And this was not a beach area. The currents were strong and forcefully crashing against the rocks on the shoreline. I said a mental goodbye as I watched my phone bounce down the rocks twice and fly into the ocean with the third, prolonged, bounce. It happened in seconds. In that time my jaw dropped and I looked out into the ocean knowing my phone was gone. And then I started laughing. haha! Yes, really! I shook my head and I laughed. I laughed throughout my hike home and then to my neighbors as I told them why I was laughing haha

Yes, I thought about the photos, videos, contacts, and memories on the phone. I thought about how the phone was my lifeline to the outside world through social media, messaging, and news. But then I realized it was replacable. I was safe and my phone was in the ocean…I was okay with that.

And then I thought about letting go. Letting go has been the biggest theme of 2016 for me. I think it started when I shaved my hair off in January, continued when I sold and gave away (practically) all of my possessions in February, and manifested in various ways as I have decided to end associations with toxic people. Of those three, I think the latter is the hardest to deal with. Hair grows back, you can buy more things, but we are wired to connect with others. Separation is difficult, but often it is the healthiest choice.

So, when I think of the list of things I’ve let go of so far this year, I can’t say I’m too surprised by the loss of the phone. But as with every other form of loss, your reaction determines your reality. I am thankful that I was able to laugh off the loss of the phone and not get too caught up in the moment of the loss and think of all of the things I could have done differently. I moved on quickly and got about the business of setting up my backup device.

I was reminded that life goes on…until it doesn’t. haha Things are forever out of our control, but our reactions belong to us. We get to decide whether we are going to allow a situation to break us or make us stronger. We decide if we are going to stay rooted in the moment or if we’re going to move on. We get to choose whether we see the humor in the situation or dwell in the loss. Choose wisely ;)

There is a beautiful poem by Hafiz that comes to mind:

Is a suspended blue ocean.

The stars are the fish

The planets are the white whales

I sometimes hitch a ride on.

And the sun and all light

Have forever fused themselves

Into my heart and upon

There is only one rule

On this Wild Playgound,

In the Beloved’s Divine

O, in the Beloved’s