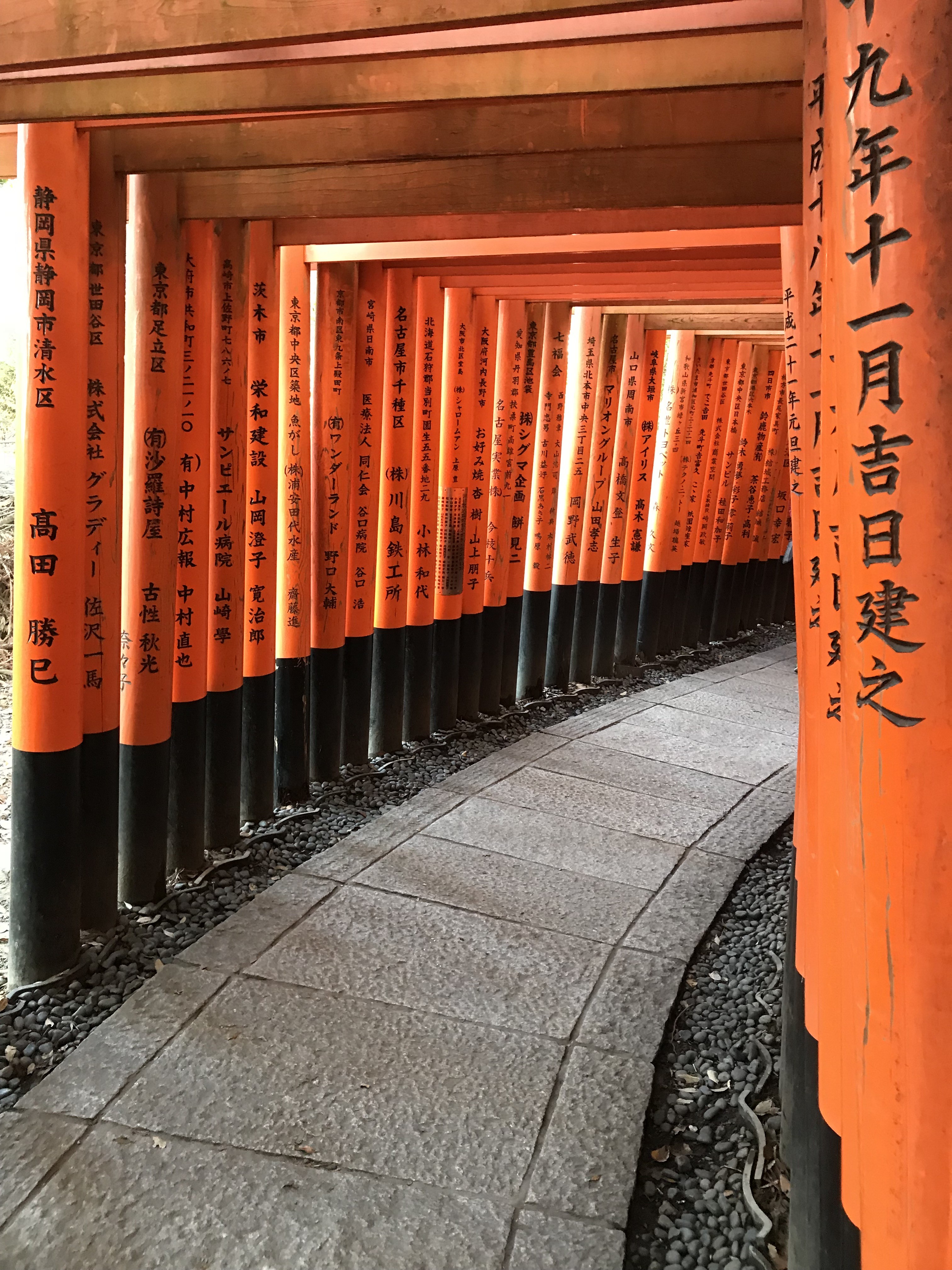 I had seen pictures of the thousands of torii (Shinto gates that symbolize that everything on the other side of them is holy) at Fushimi Inari in Kyoto…and I’d dreamed of one day visiting. I don’t know why, but the beauty of the shrine always fascinated me. I wondered, what might it feel like to walk under these magical torii?

I had only the idea of one day visiting this moment, but I had no plan. Honestly, I also had no thought of making a plan! But somehow, the Universe took control of things and the visit happened far sooner than I could have imagined. It began with my decision to visit Thailand…

Even from California, the journey to Asia is long (at least 13 hours by flight). As a result, I always try to add on another Asian country to my visit. Historically, I’ve tacked on Bali…but this time, I was trying to figure out how to return to Japan, even for a day!

Fortunately, the American Airlines website was not working properly, so I had to call them. (At the time, it seemed like an annoyance.) I booked my trip to Thailand with the agent, and focused on having a long layover in Japan. The most she could find was 23 hours, and that seemed okay at the time…so we booked it. I had assumed that extended the trip more would cost a lot, and made a casual comment to that effect. She asked me if I wanted her to check, and I replied, “Sure, why not?!” To my surprise, extending the trip four more days only cost $100! I made the impulsive decision to do it!

Days later, I wondered if those five days in Japan would cost as much as my month in Thailand (haha), but I pushed those thoughts aside and remained excited about my trip.

During my last week in Thailand, I decided that I should take a crack at planning my time in Japan. I tried researching trains, hotels, and cities, but honestly, it all seemed like a blur. It was probably because of the heat in Thailand and my engagement in the training there…there’s also a chance that I was suffering from dehydration from the combination, too! In the end, I decided to just book my first hotel in Tokyo so I would have a destination from the airport. I knew that the only thing I really wanted to do in Tokyo was return to Ueno Park, so I selected a hotel in the Taito area (near the park).

When I arrived at my hotel in Tokyo, I can only remember being exhausted. I got there early in the morning (10am, after at 7:15am landing!), and I’d dealt with my luggage on three different trains, before finally decided to exit the subway and get a cab! (Fortunately, I also knew that my hotel was near the Tokyo Skytree, which is a major attraction. Therefore, it was a major subway stop…and an area where I knew I could find a taxi.)

Unfortunately, my room was not ready, so the front desk recommended that I got to a bath house to relax. I wasn’t keen on the idea, but I was staying at a business hotel without any real facilities…so unless I wanted to sit on a hard chair in the cafe for four house, the bath house was the best choice. They told me the bath house had hot springs (really hot tubs), restaurants, and resting rooms…and all of those things sounded good in my state of exhaustion. So, there I went!

The bath house was sorted by gender, and you’re not permitted to wear anything  in the pools. It ended up being an odd cultural experience as I walked around naked among Japanese women of all ages, and relaxed in hot tubs. Everyone was polite and pointed out where I should place my towels, etc. Soon after arriving, you stop caring, as you realize no one else does. There was a sense of freedom there that seemed missing in other parts of the culture in Japan. I understood the draw.

After a few hours there, I returned to my hotel and had thoughts of abandoning the thought of visiting other cities in Japan and just staying there. It would be cheaper, I reasoned, and I was so tired that I could rest there.

But fate had other plans as the hotel I was staying at was booked for the rest of my trip! I had to find other accommodations anyway…so why not just go to the other cities?  Following that thought, I went to sleep.When I woke up, I decided to go to the front desk to figure out the best way to get to Osaka.

The concierge gave me a website that greatly simplified all of my travel around Japan (https://world.jorudan.co.jp/mln/en/), and solidified my decision to use my remaining days to visit new cities. I’m really thankful for that.

My biggest challenge was managing all of my luggage in the various train stations, and on-and-off all of the trains. Since I’d spent a month in Thailand, it was hard to avoid the size of the bags…and it was the reality I had to deal with. In hindsight, I probably wouldn’t have changed anything because storing my bags or sending them ahead would have been more expensive, and more of a headache. More days and less stuff were probably the only thing that would have helped.

Since I had limited time, I decided to focus on visiting one site per city. That’s it. In Tokyo, Ueno Park was an easy choice. In Osaka, I decided that I only truly cared about seeing the Osaka Castle…and that turned into an awesome experience (I sort of became part of the attraction, as 20+ Japanese tourists wanted to take photos with me there! haha). And in Kyoto, Fushimi Inari was an easy choice. (I later added Yokohama simply because I found a great price on a 4.5 star hotel and decided that would be a good place to rest haha An added bonus is that there was a coach shuttle to the airport that did not require anymore train travel!)

I rented a bicycle and biked to Fushimi Inari just after daybreak (6:45am). After getting slightly turned around, and braving some steep uphill areas, I arrived around 7:45am. (I learned in Osaka that it is best to arrive at 8am or before to avoid massive numbers of tourists that usually flood major attractions between 9 and 10am.)

There were only a few tourists at that time, which was great because that meant that I could walk through the torii (mostly) alone…and have some people around if I wanted to take photos haha. But I think it felt most magical because it was empty and you could really feel the history. (When I left a few hours later, it was packed and devoid of a lot of that feeling.)

Still, the feeling I remember most was when I was overcome with emotion for simply being there. How I’d imagined one day being there…and, without any real plan, I’d made it.

But it is so easy to forget these lessons. It is easy to get caught up in the doing rather than the being. However, once decisions became essential, it was easy for me to get them done. I only did what I had to do when I needed to do it.

If we do only what we need to do, everything will get done.

The time at Fushimi Inari was beautiful…not just because of the magical torii and mountain hike, but also because of the reminder that we get where we want to go, even without really trying…and, usually, not when we imagined we would.

It was a reminder to me to flow more, and resist less. 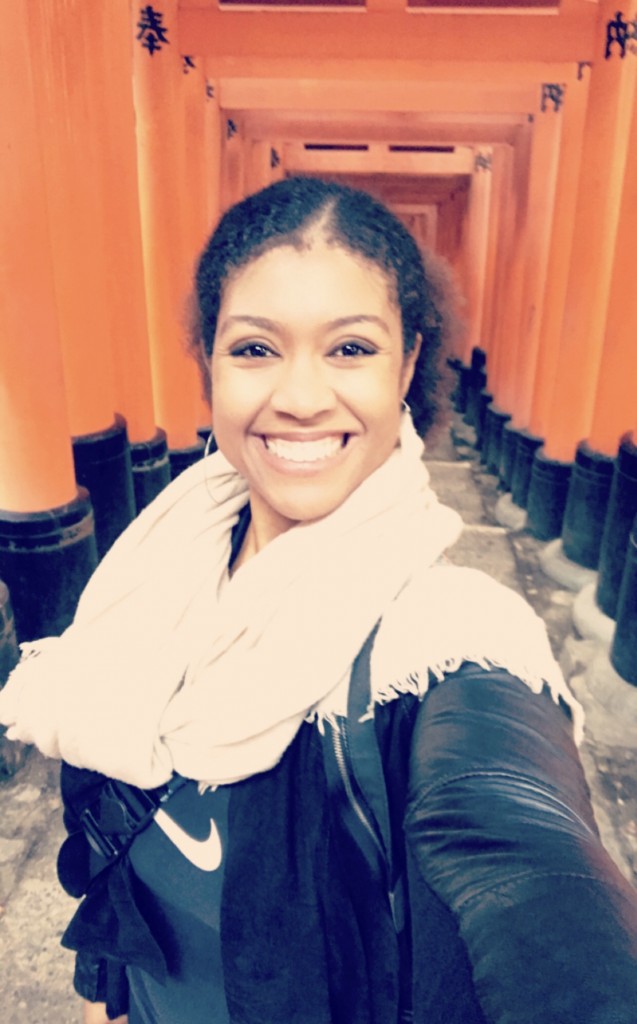