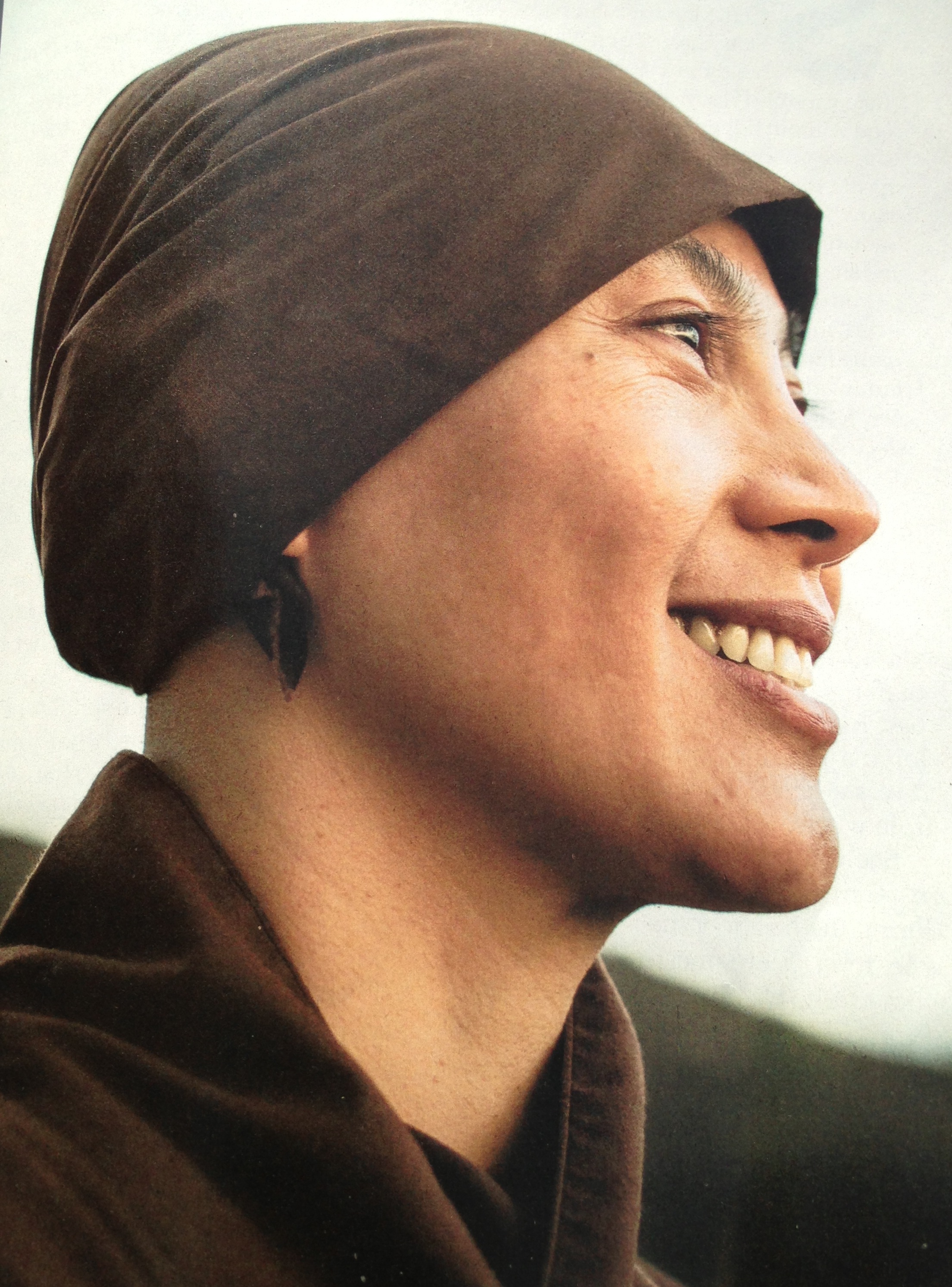 Before leaving for the gym today, I decided to grab my Jan 2014 copy of Prevention magazine on impulse. [I’m not so good at reading all of the magazines I subscribe to…I’m resolving to go through ‘the pile’ and give away issues after I read them! haha…but I’m really glad I grabbed this one today.] I read the “Life Lessons” story and was speechless after reading it…so much so that I’ve decided to just go ahead and type the whole story and share it with you :)

When she left her career as a medical doctor, Sister Dang Nghiem, MD, a Zen Buddhist nun and disciple of Thich Nhat Hanh, learned the true meaning of healing.

Sitting cross-legged on the floor of a meditation room at Blue Cliff Monastery in New York State, Sister Dang Nghiem, 45, has the enviable air of a person who can (and does) sit still for hours on end without fidgeting. It’s not just because she wears obvious markers of a monastic Buddhist life — the shorn hair, the brown robes. It’s that Sister D has a kind of radiant inner calm that you can only imagine she was born with. Except she wasn’t.

Fourteen years ago, Sister D barely even meditated. She answered to the name Huynh Thi Ngoc Huong and was a family physician who lived with her partner, John, in San Francisco. She’d known since she was a little girl that she wanted to dedicate her life to helping others. So after emigrating from Vietnam to the United States when she was 16, and then graduating from the University of San Francisco, Medical School, she seemed, on the face of things, to have it all: a best friend and lover in John; a prestigious job. It was a long, long way from where she’d come.

She was born in 1968 in Central Vietnam during the height of the war to a Vietnamese woman who was in and out of her life. She never knew who her father was but was told he was a US soldier. For much of her childhood, Sister D had to fend for herself, facing verbal, physical, and sexual abuse from relatives, though she took solace in her grandmother, whom she adored.

Her grandmother wanted Sister D and her younger brother to be the first in their family to go to college, and in 1985 — because of a stipulation in the Amerasian Immigration Act allowing children of US and Vietnamese citizens to apply for American citizenship — she moved the children into foster care in the United States. By the time Sister D started medical school, she and her brother had been shuffled through five different foster homes.

In September 1999, Sister D was officially an MD. The circumstances of her life bore no resemblance to those of her troubled youth, but the feelings, the depression she’d struggled with since childhood, still dogged her. She’d been pushing John away, steeling herself from him when the sadness hit, which was often. Just before her 31st birthday, John suggested they take a trip to the coast to celebrate. She told him she wanted to be alone, so he took the trip solo. A couple of days later, on the morning of her birthday, Sister D was on call at the hospital when she got word that John had drowned. That was her last day as a doctor.

The pain of John’s sudden death was unbearable, and it forced her to look inward.  “When the healer is not healed,” Sister D says now, “when she is wounded herself, she cannot really care for others.”

If she was going to be able to help other people, she thought, first she would have to face her own difficult past: “All my life I thought that if I became very successful, if I found a loving partner, then that would make up for everything I lost of never had as a child. But I wasn’t happy, because I didn’t know how to handle my past.”

Just weeks before John’s death, Sister D had attended a 5-day mindfulness retreat with Thich Nhat Hanh, a well-kn0wn and respected Zen master. In her memoir, Sister D recounts how John first introduced her to the concept of mindfulness — of living in the present moment through meditation and by focusing on the breath. She’d absorbed some of that by being around John, but after this immersion with Nhat Hanh, something shifted inside her. “It showed me that there are concrete practices,” she says. “There is a path, there is a way of life that I can practice, and it can help heal me.” So while she would not return to her job as a doctor, she decided to focus, at least for a little while, on healing herself and others by learning and teaching mindfulness. She packed up her life and moved to Nhat Hanh’s Plum Village monastery in Southern France.

That was 14 years ago, she now resides at Blue Cliff, another of the Zen master’s centers. “I stopped being a doctor, but I continue to be a physician–I just don’t prescribe drugs,” she says. “And to anyone who comes to me, I transmit by whole energy of mindfulness. Now the healer, the healed, and the healing process are not three separate entities.”

Here’s what else she knows now…

It’s a myth to say that time can heal. Time cannot heal. Breathing and mindfulness can. [Long after a traumatic event happens to you,] a sight, a sound, a smell, a taste, a touch can trigger the complete stress response as though it’s happening all over again. What saved me was the mindfulness of breathing. Sometimes I would lie down to breathe and put my hands on my belly to slow it down and anchor my body. Through breathing, you learn to slow the stress response, the fight-flight-or-freeze response. If you can do that when going through a very intense experience, the next time you recall that trauma, you will do so with more peace, mindfulness, and clarity.

you can cultivate joy even when you’re hurting.

It’s been 14 years since John died. I still miss him every day, but I have learned to cultivate joy and peace in each breath, even though I feel that pain. You have to do them both at the same time. It’s like a garden: You have to take care of the weeds, but you also have to plant flowers. If you only weed, you’ll be exhausted and lose hope. And if you plan enough flowers, eventually there will be less room for all the weeds.

We’re not saying you have to set out 1 hour a day to sit on a cushion. We’re not saying quit your job and go live in the mountains. We’re just saying if you eat, don’t eat your projects. Don’t eat your sadness. Don’t eat the argument you just had. Just eat. If you walk, just walk. If you drive, drive. We have to choose again and again to be in the present moment. The moment you realize you are not being mindful, that’s the moment you are mindful. And you come back to it again and again. It’s a mental training.

you can keep the dead alive.

When a person dies and you lose all your joy, then it is like you are making sure that person is as dead as possible. But you can learn to call on the spirit of that person for help and learn to see him or her around you. When I see a purple flower, I remember that John loved purple flowers, and I smile. That flower, in that moment, becomes him.

Mindfulness is a powerful medicine.

Mindfulness is the most effective preventive medicine there is, because it teaches you to care for yourself. Because you learn not to cause harm to yourself or others, physically, mentally, psychologically. I learned in medicine that so many of our illnesses are from lifestyle, and the biggest factor of our lifestyle is stress. Stress will bring on any illness. Diabetes runs in my family. My mother had it; my uncle had it. My brother, who is 4 years younger than I am, developed it in his mid-30s. I’m in my mid-40s now and I still don’t have it. We can have a genetic predisposition, but our lifestyle can determine when an illness will manifest, if it will ever manifest.

in the Buddhist teaching, we talk about karma. Karma means actions, thoughts, speech. So really everything we do in life matters. You think, Oh, it doesn’t mean anything to bend down and pick up a nickel and give it to the person who dropped it. You think, Oh, it doesn’t mean anything to open the door for somebody. But you know what? Everything you do means everything. Every word you say to somebody or yourself accumulates. Mindfulness allows us to make [more thoughtful choices in the moment]. And so we are more likely to have more positive and wholesome seeds in us in daily life and very difficult moments.

If a doctor learns to practice mindfulness, if she learns to do a walking meditation as she’s going to the patient’s room — gathering herself, truly present — and she walks in quietly, peacefully, that’s already medicine. She’s calm. She’s not outside of her own body. The patient feels that attention, that tenderness, that care, that true presence. The patient is already soothed.